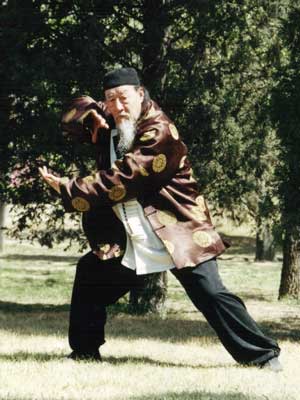 In his tiny living room, he sparred with two men in their forties, he moved with grace and ease. He moved around them like a dragon, appearing and disappearing. His energy expanding and contracting. He was like a cat toying with a mouse. As an experienced martial artist, I could see that the two men were attempting to attack him with vigor and intent, but were having no effect.

That was my introduction to this man, this master of qigong and baguazhang.

Since that time, I have visited and trained with him frequently during my times in Beijing. In 2007 I brought a group of students to study with him. I learned many valuable lessons from him not only in bagua, qigong, and clinical work, but also in how to live with heart, to live fully, and to share openly.

Martially, he never taught circle walking or prescribed forms. He taught principles of movement and energetics and the adaptability of techniques.

As a devout Catholic, he shared his heart with all around him. As a double monkey, he was quick witted, mischievous, and liked by all who met him.

I hope that I may honor his memory by the continuance of the lessons learned, transmissions given, and lineage passed on.

He will be remembered fondly. 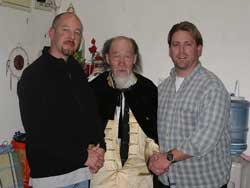 Master Duan demonstrating "Rippling the Spine." I felt waves of electricity with each ripple. Simply amazing! 2004. 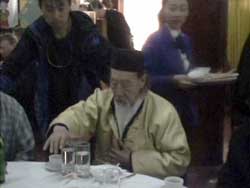 Master Duan removing the alcohol content from a glass of "gut shot". 2004 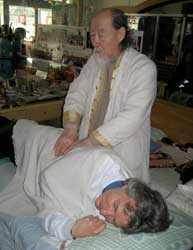 After this treatment, Paula felt her kidneys vibrating for many days. 2007.