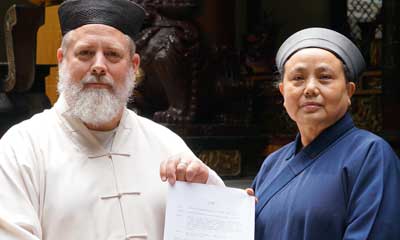 (The certificate and translation are below.)

This letter is to announce that Abbot Bernard Shannon (至厚道长) has been duly appointed the Ambassador for Qing Cheng Daoist Association for the United States.

He is charged with promoting the virtues of the Dao with all who seek it; disseminating the true teachings of Qing Cheng Mountain's Daoist culture, mysticism, and life cultivation; and helping others find stillness of mind and tranquility in life.

Abbot Bernard Shannon has demonstrated many years of dedication to Daoist culture, faithful practice of Daoist arts, a high level of accomplishment, and a great level of respect and loyalty to his teachers and students.

Since 2004, he has come to Qing Cheng Mountain, the source of Chinese Daoism, in Dujiangyan, Sichuan, and trained diligently in True cultivation. Additionally beginning in 2005, he has brought his Daoist disciples and students to China and particularly Qing Cheng Mountain to study all aspects of Daoist life, cultivation, and esoteric skills.

In 2006, Abbot Zhang Ming Xin gave him the name "Authentic Virtue" (至厚; Zhìhoù) and encouraged him to start a Daoist temple. She assisted him in the naming of the Temple of Peace and Virtue (安德福神宫), which began operation shortly there after in California. From that time, he has taught Daoism in many countries and has many disciples and students. He has given several disciples permission to teach and others permission to start temples.